The Congo–A quirky coup. And dangerous convergence of interests?

On Monday December 30, an attempted coup was carried out in the DR Congo with coordinated attacks in Kinshasa, the capital city, and in Lubumbashi, centre of the country’s mining region. (map) The Congolese Army quickly quelled the coup and regained control of the international airport and state radio and television stations in Kinshasa.  In total, about 40 attackers and up to 60 civilians were killed.

Before the TV transmission feed was cut, the attackers announced on air to the country: “Mukungubila has come to free you from the slavery of the Rwandan.”

Paul Joseph Mukungubila is a self-proclaimed Christian prophet who has a church in Lubumbashi with a small number of followers. 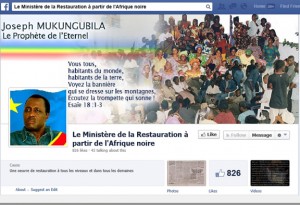 In recent weeks Mukungubila has been highly critical of the Government’s peace agreement with the Tutsi-led M23 rebel group. On December 5, he published an open letter on his ministry’s facebook page in which he condemns the Government’s soft treatment of the M23 rebels, asserts that the M23 are all Rwandans, claims Rwandan President Paul Kagame is poised to annex part of the Congo. He also decries Congo President Joseph Kabila’s advocacy for legislation that will provide citizenship and land to “newcomers.”

Given its quick defeat, one might be tempted to look back on this most recent coup attempt with a shake of the head and dismiss it as just another unpredictable quirky event in the life of the Congo.

But maybe we shouldn’t.

Many Congolese share Mukungubila’s belief that President Joseph Kabila is not Congolese, but rather a Rwandan imposter who serves the interests of Rwanda–the Congo’s mortal enemy.

Many more Congolese citizens agree that Congolese “Rwandophones” are not indigenous to the Congo and therefore should be “sent back” to Rwanda. Congolese Rwandophones are ethnic Hutu and Tutsi citizens who speak Kinyarwanda, the Rwandan language. Some of them have lived in eastern Congo for generations, going back to the late 1800s, while others have been in the DRC for 50 years or less. Nearly all were born and raised in the DR Congo.

Etienne Tshisekedi, the strong presidential candidate in 2011, shares these beliefs, as do his followers.

Etienne Kabila, who claims to be the rightful some of former President Laurent Kabila, shares these beliefs. There were the basis of his 2013 coup attempt.

The Lingala speaking Congolese diaspora at demonstrations in Toronto and Ottawa a couple of years back repeatedly chased away a Canadian-Congolese man who spoke Swahili, derisively calling him “Rwandan.”

For those of use interested in a long term stable peace and human rights in this beautiful but troubled country, we must understand that the call for “Rwandans” to be sent back to Rwanda is in fact a call for ethnic cleansing.

This quirky coup unites strange and powerful bedfellows in the call to topple President Kabila.

One Response to The Congo–A quirky coup. And dangerous convergence of interests?