This blog is definitely a matter of teaching an old dog new tricks.

Let’s get caught up a little.

I arrived in Kigali, Rwanda on Sunday afternoon. Already had stomach trouble so decided to take a taxi to the eastern Congo border instead of the public bus. Got lucky with a fascinating taxi driver, Yassine. We were driving out of Kigali when he pointed out a white building shining on the hillside. “You must go there when you come back to Kigali”, he said, “it’s a memorial to the victims of the genocide.” Now that’s a great conversation opener. I asked him a zillion questions about the genocide for the first two hours of the drive. (In the last hour, jet lag got the better of me and I could barely keep my eye open.)

Yassine had been a driver for SkyNews UK during the height of the genocide.  He would accompany the
journalists to the genocide site immediately after they happened.  He witnessed the horror.  The worst was 10,000 killed in one
incident.  He talked of driving his journalists to meet with General Romeo Dellaire. Yassine would stay outside,
but many times he saw General Dellaire standing on the balcony above him,  looking down the road to assess the situation – where were the Hutu Interahamwe genocidaire,  Paul Kagame’s liberating Tutsi rebels?

What struck me the most was Yassine’s absolute confidence that Rwanda could never return to inter-ethnic violence. He credited this remarkable change to the post-war local election of community judges all across the country who tried and sentenced local perpetrators of war crimes in their own communities, and also to the government’s persistent communications for
reconciliation.

Rwanda is an extraordinarily beautiful agrarian country. The drive was spectacular. I was amazed at the orderliness and great conditions of the roads. Which halted abruptly the second we reached the border.

We arrived at 7:15pm at the Congo-Rwanda border. It had already been dark for an hour. Yassine could not cross the border into the Congo, so we unloaded my bags and Yassine headed back to Kigali.

I stood alone there in the darkness.  Two barriers across the road and a load of taxis and men standing about in between.
When in doubt, follow the crowd. Near the first barrier was a small crowd standing on uneven mud ground outside a lit window. I worked my way to the front and was handed a Rwandan customs form.  Filled it in, handed it back, and was waved on.  Uh, now what?  As a foreigner standing alone, I was quickly attracting new taxi friends.  Spotted a line of people ahead snaking behind a small guard building.  I joined the queues and followed the line in the dark behind the little building and around the barrier on the Congo side of the border. A taxi driver pointed to another lit window up a small embankment. I presented my passport there (while one of my new friends asked for “some money;  just one hundred dollars.”)  All good.  Nice older man took my passport and stamped it.  Found a taxi driver who got me safe, sound, and extremely tired to my hotel.

No functioning internet at the hotel.  Got up in the morning and walked to Hotel Nyira — a small guest I had stayed at while in Goma last year  (stopping along the way to buy a local cell phone.)   Although it had changed hands,
still looked good to me and I changed hotels.

Later Monday afternoon I met with the Country Director for Merlin UK and hit gold.  He had lived in eastern Congo for four years and had unique perspectives on issues related to public mood, security, peace stabilization, and the upcoming elections.

The roads in Goma are insane.  I can’t believe my driver is able to get thru on them. Massive pot holes. Back roads untouched since the volcano erupted a few years ago sending the lava flows thru town into Lake Kivu. Zero sign of improvements since May 2010.

Spent much of the day on logistics for other meetings and confirming my boat reservation for travel on Friday to Bukavu.  Everything takes so much time.

Time to order dinner and wind down for the day. 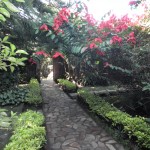 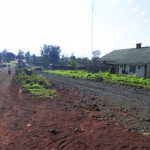 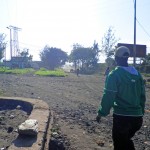 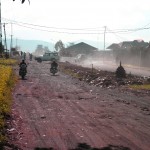 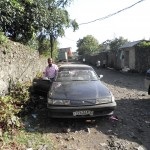 What Canada Can Do to Avert More Violence in the Congo
Day 4. DR Congo.