FRIDAY OCT 14. I was picked up at 6:30 am this morning to go down to the port where I caught the boat to Bukavu. The boat trip took 2½ hours from Goma at the south tip of Lake Kivu to Bukavu at the north end of Lake Kivu.  It was an easy boat ride with spectacular views – Congo on the right side of the Lake Kivu and Rwanda on the left side.

I was met at the port in Bukavu by Theo, the Coordinator for a local Congolese NGO called GRAM-Kivu. He speaks English quite well, which I hadn’t expected.  And he constantly has a huge smile on his face.

Bukavu surprised me. It seemed so much bigger than Goma – and far more lively.  People everywhere buying and selling things.  Lots of stores, lots of vehicles, much better roads, new construction underway.

Theo and I first dropped by the GRAM-Kivu office, where we added two more to our entourage, then picked up his wife. The six of us, including driver, set off for Kalonge village.

Kalonge is 60 km north of Bukavu. The three hour drive that took four hours and could have been much worse.

The villages we passed through appeared very orderly and clean with obvious drainage systems. Most homes I saw were rectangular and made of clap board, or mud and clapboard – like a small cabin in northern Ontario.  Some were round with mud walls with a thatched roof.  Larger buildings are made of brick. At one road block, a man was taking full advantage of the vehicles stopping to canvass passengers on behalf of one of the presidential candidates for the upcoming election.  Democracy at work

As we kept driving, the roads got progressively worse and worse. They started out paved and ended up wet mud. After driving for some time on the bad section of road, Theo turned to me and, with a huge grin, said “Now the road gets bad.”  Oh my gosh, he was not kidding.  Our maximum speed slowed to a maximum of 12 km/hr. This worst section of the road is in Kahuzi-Biega National Park.

Kahuzi-Biega National Park is a UNESCO World Heritage Site. It is home to the endangered Eastern Lowland Gorillas. It is also home to the feared FDLR rebels / Interahamwe (genocidaire Hutu group from Rwanda) who hide in the  forests in this region.

We weren’t too far into the park when we faced a massive mud hole the full width of the road.  The driver, Bertie, stopped for a moment.  “This is it,” I thought, “we turn back now.”  But the driver gunned the engine and headed for the mud hole. “This is it,” I thought, “we spend the night stuck in a mud hole.”  But no, Bertie drove through.  And he drove through and around many worse mud holes we encountered.  Like nothing I’ve ever even seen in a movie… because no one would believe it if they put this in a film.

But ultimately even brilliant driver Bertie was brought to a halt by a large truck that had broken down across the road.  After some waiting, much discussion, and the exchange of money, the fellows in the broken down truck agreed to lend us their pick axes and shovels and help us widen the road.  Yup, that was the answer.  We’d dig into the soft side of the mountain and widen the road by a few feet so we could drive past the truck. Have to wonder what UNESCO would think of this.  (photos below.)

The harsh poverty is hidden.

As are the FDLR rebels who live in the forest around the village. Everyone fears an all-out attack– in the eastern Congo, the FDLR rebels occasionally attack an entire village, raping and pillaging.  The vicious rape of women here is not uncommon.  Just a few days before I arrived, a woman had been attacked by men in uniform, gang raped, and was now in the local hospital run by Mercy Corps International.   (Wasn’t clear whether it was the FDLR or another armed group.)

I visited the GRAM-Kivu projects in Kalonge.  GRAM-Kivu provides counselling, support, and livelihood training in the region broadly for 1) women and girls who are victims of sexual violence and 2) for teenage boys and young men who had been child soldiers.  The women and girls were learning sewing and tailoring, while the boys were learning metallurgy.  They were definitely gaining skills, but lacked materials to grow. To the great amusement of everyone, the elderly instructor took my measurements to make a shirt for me while a young man gleefully shouted them out as he recorded them .  It seems the entire town of Kalonge is now in knowledge of my bust size. Sigh.

The Boy Soldiers. It was really hard to hear the boys’ stories.  Three of the four I talked with had been abducted and forced to fight.

When they demobilized after the war, the boys returned to their homes but each of them was rejected and sent away.  Even their families were afraid of the former child soldiers.  They had nothing and nowhere to go. UN promises of education and training didn’t reach them in their remote villages.  GRAM-KIVU is everything to them now, although it’s not much.

Each of these teenagers/young men seemed so vulnerable.  Used and thrown out.  Childlike and innocent in their demeanour. And each of them absolutely likeable. I wanted to tell them that the whole world believes that what happened to them as children is wrong, but knew I couldn’t say it out lourd without choking up.

In a post-conflict society, it is always a concern that former combatants may return to a rebel group if they can’t find a place in civil society. It is very very difficult for me to imagine any of these four returning to violence, even though they have little more now than poverty, hopelessness, and rejection.

All in all, I was the white woman paraded about Kalonge. I drew the line at being presented to the village chief.  Frankly, none of this related to Pragmora’s research work which was extremely frustrating.

We spent the night in the village at GRAM-Kivu’s local ‘residence.’  Hard to describe but a great experience.  My GRAM-Kivu hosts were wonderful. Even conjured up a vegetarian meal for me.

Today was an adventure.

(Can’t figure out how to put the photos in order)

Gorillas surviving against the odds in Kahuzi-Biega:  http://www.gorillas.org/eastern_lowland_census 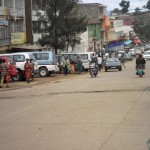 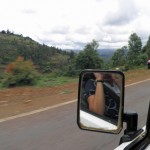 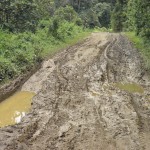 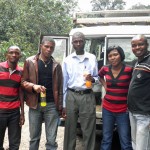 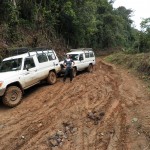 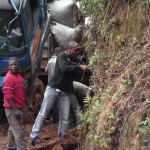 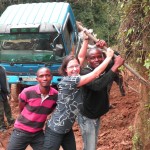 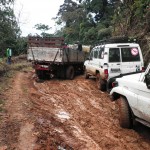 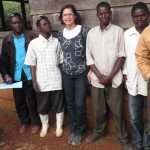 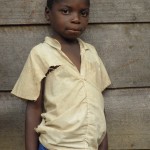