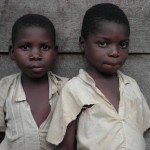 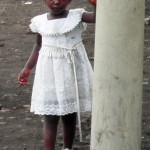 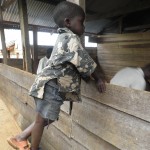 All the logistics were laid out now. My driver picked me up at 1:30pm at Nyra for the 10 minute drive to the border. Then I retrace my steps thru the confusing and awkward immigration system. Haul my bag up six steep steps to the window with the Congolese immigration fellow. All’s good. Back down the stairs, drag my bag on wheels across the rough road and around behind the “hut.”

Then walk between the two countries to the Rwandan side of the border to Gisenyi. Odd feeling even in daylight.

Yassine, the taxi driver from Kigali was there waiting for me.  A few kerfuffles with immigration (my Rwanda visa said I was arriving in Kigali and yet there I was in the flesh as presenting my documents in Gisenyi) but only slowed me down for a few minutes. Then in the taxi for the beautiful drive on smooth paved roads to Kigali. We made good time. (Stopped only once for speeding, but Yasinne knew the police officer so he was spared a $100 fine.)

Yassine directed me to a post office right at the Kigali Airport. I had bought some postcards on my way in at the Entebbe Airport in Uganda, and written then while in the Congo, but turned out there isn’t a post office in Goma anymore. So they got mailed from Rwanda.

Nice short flight from Kigali to Entebbe. Arrived around 10pm. Entebbe’s quite a nice airport. Spent the night at the airport.

Wednesday October 19. In the wee hours of a long night, I was fatally tempted by a mini veggie pizza at the 24 hr cafeteria. Even as the man behind the counter was warming it up I knew it was a mistake. Took less than two hours for the stomach consequences to hit. My own bloody fault.

Around 4am a lovely man in a white lab coat approached me to do a survey! Well, I’d be DE-lighted to do a survey! Very well written survey getting customer feedback on airport services.

Managed to get in a couple hours sleep before hopping on the British Airways flight in the morning. Nine hours to London. The Mercator maps have permanently distorted our perception of just how huge Africa is. Heathrow Holiday Inn Express Hotel was heaven.

Received a text message that Qaddafi had died and was I available to talk to Global TV’s new morning show. Would have liked to, but was reading to board my next (and final) flight.

Landed in Toronto in the early evening. Exhausted.

One Response to Days 9-11. Heading home.