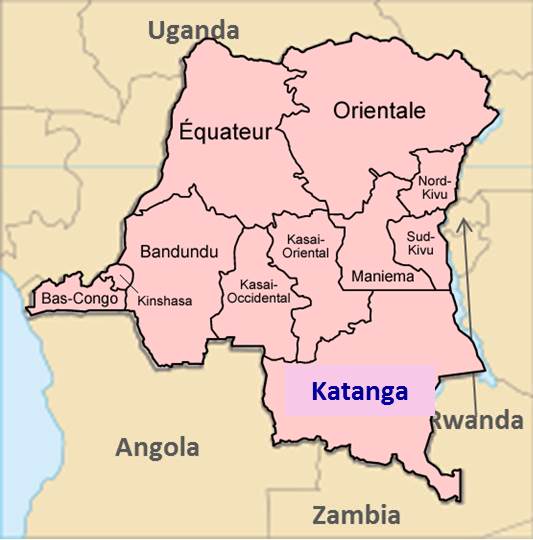 Feb 2004. Mai Mai fighters massacre local villagers near Kitenge in Katanga Province. They are led by General Mbayo Mpiana Mwana Butot, known as “Chinja Chinja” (Swahili for “slaughter slaughter”), who is unwilling to integrate into the Congolese Army as all other rebel groups have done under the 2003 peace agreement to end the civil war.

In the northeastern province of Ituri, A UN peacekeeper is killed in the fighting.

Mar 2004. There is another coup attempt in Kinshasa.

The Rwandan military enters the Congo on an offensive against Rwandan Hutu rebels (Interhamwe) based there—in violation of the 2003 peace agreement. Rwanda says it is just responding to a cross-border rebel attacke on the Rwandan town of Gisenyi.

May 2004. Seven militia groups in Ituri sign a peace agreement with the transitional government.

Jun 2004. Led by General Laurent Nkunda and Colonel Jules Mutebusi, the (Rwandan-backed) RCD-Goma Tutsi rebels take control of the UN-held city of Bukavu. Nkunda says Congolese troops have been attacking Tutsis and the RCD are protecting fellow Congolese Tutsis against a potential genocide. In Kinshasa, violent anti-UN protests erupt, but the UN says its does not have a mandate to use force to stop such rebel advances.

Another coup attempt is quickly put down. Government troops retake Bukavu. Fearing reprisals, as many as 30,000 local Congolese Tutsis flee across borders in Burundi and Rwanda. 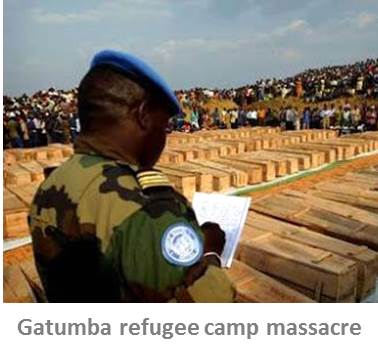 Aug 2004. More than 150 Congolese Tustis (and some Bembe) are massacred in the Gatumba refugee camp in Burundi, across the border from the DR Congo. A Burundian Hutu rebel group claims responsibility; eyewitnesses implicate Congolese and Rwandan Hutus. Rwanda’s Tutsi-led government says it will intervene directly in the Congo, if necessary, to prevent future attacks on Congolese ethnic Tutsis, while Burundi threatens direct action to flesh out the Burundian rebels based in the Congo. MORE

Oct 2004. Amnesty International reports that more than 40,000 women and girls were raped during the six years of war.

Dec 2004. President Joseph Kabila accuses Rwanda of sending troops into the Congo to loot natural resources—an allegation Rwanda vigourously denies. Rwanda’s President Paul Kagame warns the Congo that he will take “imminent” military action to hunt down the Rwandan Hutu rebels based in the Congo.

MONUC peacekeepers in the Congo are accused of rape, pedophilia and prostitution.

Mar 2005. In Ituri, UN peacekeepers arrest warlord Thomas Lubanga of the largely Hema Union of Congolese Patriots. Over the past five years, more than 50,000 people have died in the Ituri conflict.

The UN unanimously adopts a resolution to widen the international arms embargo to include all rebel and militia groups in the DR Congo.

Jul 2005. Rwandan rebels carried out a massacre in the eastern village of Ntulumamba by burning people alive in buildings. Blame is placed on the FDLR Rwandan Hutu rebel group (who deny involvement), and a new group, the Rastas. Locals believe the attack is intended to discourage them from supporting UN peacekeepers.

Nov 2005. The Congo parliament adopts an amnesty law for “acts of war, political offences and opinions” committed between August 1996 (start of the rebellion against President Mobutu) and June 2003 (when the current transitional government was put in place). The amnesty does not include war crimes, but does include political assassination.

Supporters say the amnesty is necessary for the country’s transition from civil war to the 2006 elections.

Dec 2005. A national referendum is held on the draft Constitution. Main opposition leader Etienne Tshisekedi calls for a boycott of the vote. The UN reports a “relatively high voter turn-out” and polling that is “largely free, fair and peaceful.”

The UN International Court of Justice rules that Uganda violated the sovereignty of the DR Congo by sending armed troops into the country and “occupying Ituri, violations of sovereignty, illegal use of force, violations of international human rights laws and looting and plunder” between August 1998 and June 2003. Uganda says it had to send troops into the DRC to protect its borders from Congo-based rebels, and did not exploit natural resources.

In Ituri, fighting heats up as various rebel groups seek to re-take territory from the Congolese Armed Forces, including the FNI militia, headed by warlord Peter Karim.

Jan 2006. Official referendum results show the Constitution passed with 84% in favour. (This Constitution is still in effect today.)

Eight UN peacekeepers are killed when they come upon Ugandan rebels from the Lord’s Resistance Army (LRA) encamped in the Congo’s Garamba National Park. Twenty thousand villagers flee the fighting.

Feb 2006. The UN International Court of Justice rules that is does not have the jurisdiction to rule on the Congo

BACK TO: DR Congo timeline

One thought on “timeline7”