Mahinda Rajapaksa took office as President in 2005. He immediately began a relentless drive to defeat the LTTE ‘Tamil Tigers’ and end the long-standing civil war by employing a military-only solution. His brother Gotabhaya became the Secretary of Defence, and another brother, Basil, was appointed the President’s Special Advisor.

During the past four years, the voice of media was severely restricted, Sri Lanka had the highest rate of ‘disappearances’, and the government was repeatedly accused of corruption, human rights violations, and even war crimes.

By succeeding in ending the civil war, however, President Rajapaksa has achieved almost a ‘cult of personality’ status among the Sinhalese majority in Sri Lanka.

Rajapaksa is a very strong President who has the power to determine whether Sri Lanka builds a stable peace for all its citizens, or suffers a resurgence of violence. Official bio

General Fonseka is the only individual in Sri Lanka who has a chance of beating Mahinda Rajapaksa in the January 2010 presidential elections. As the Army Commander during the last few years, General Fonseka is considered a hero for his role in leading the country to victory over the LTTE ‘Tamil Tiger’ separatists.

He is a military ‘hawk’ and a staunch nationalist. Not long after the end of the civil war in Sri Lanka, he pointed to a new enemy: “We have a daunting task to protect our motherland from India.”

He believes Sri Lanka belongs to the Sinhalese people – although is willingness to allow other ethnic groups to live there. In his provocative resignation letter, Fonseka expresses concern that having won the war, the Government must address the plight of the Tamil Internally Displaced Persons and “win the hearts and minds” of the Tamil people if it is to “win the peace.”

Since the final phase of the civil war began, President Rajapakse has used one criterion in deciding who are Sri Lanka ‘s ‘true’ friends and who are not. Nations that consistently supported his military-only solution to the civil war are ‘true’ friends; nations that called for a negotiated settlement with Tamil rebels are not. This delineation has resulted in a new anti-western sentiment in Sri Lanka (heightened by rekindled anti-colonial resentment). As a result, external voices, including those of Britain, the United States and the European Union, which express concern about human rights, media control, civil rights and war crimes have greatly reduced influence. 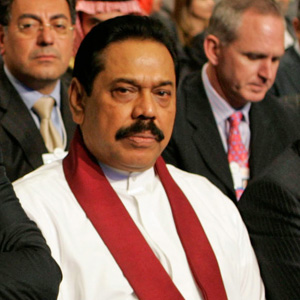 Gotabhaya Rajapaksa is an extremely powerful player in Sri Lanka both as the Secretary of Defence and as the President’s brother. Secretary Rajapaksa was the architect and day to day manager of the military operations that ended the civil war, and today oversees the post-war expansion of the military and installation of security measures in Tamil-populated regions. Although popular and personable, Gotabhaya Rajapaksa is important only as long as his older brother remains President. Official bio

Today the Liberation Tigers of Tamil Eelam (LTTE) appear decimated as an organisation and not a threat to the state of Sri Lanka. The possibility remains, however, of former LTTE militants engaging in renewed terrorist attacks on an ad hoc basis. Such violence would have no chance of securing territory as the LTTE did, but could be highly detrimental to the development of a stable peace for all Sri Lankans. Even one Tamil suicide bomber in Colombo could accelerate the country’s slide towards being a militarized state and justify a greater crackdown on Tamil civilians by state security and military forces.[/fivecol_three][fivecol_one] 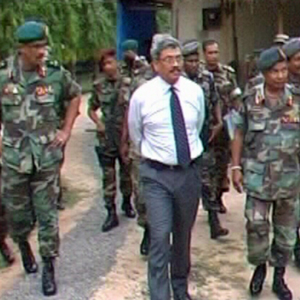