In 1505 the Portuguese arrived in ‘Ceylon’ (the European name for Sri Lanka at the time). They began to take power right away and eventually conquered all kingdoms, except the Sinhalese Kingdom of Kandy. The Portuguese ruled Sri Lanka for 150 years.

In 1658, the Portuguese ceded control of Ceylon to the Netherlands , which had a strong trading interest in the spices grown on the island. The Dutch ruled for 140 years although, like the Portuguese, they were unable to gain control of the Kingdom of Kandy.

In 1796, the Dutch surrendered to the British. After almost 20 years of military incursions the British succeeded in capturing the 400-year-old Kingdom of Kandy, which removed the last base of native rule on the island. Britain unified the country by making English its one official language.

For four hundred years virtually all political power in Sri Lanka was held by the colonialists. In 1910, about 4% of the native population was given the right to vote, but this concession to the native population only intensified demands for a greater share of the country’s political power. Twenty years later, in 1931, all adults in Sri Lanka were granted the right to vote although the British retained supreme political control. Political parties emerged over the next few years and formed a firm foundation for democratic self-government. 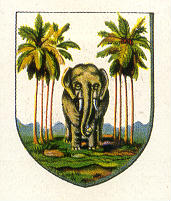