Retaliations and violence spiraled out of control. In communities across the country, Sinhalese rampaged against Tamils while the military turned a blind eye. More than 2000 Tamils were killed, and hundreds of thousands forced to flee their homes to avoid the conflict. Hundreds of thousands of ethnic Tamils sought refuge in the southern Indian state of Tamil Nadu. These events are known in the Tamil community as ‘Black July’.

As a result of these events more Tamil youth joined the LTTE. The LTTE now was not only the focal point for Tamil aspirations for a separate state, but also had a strong enough core to launch a full-fledged insurgency.

1985. The Government and LTTE met for the first time to talk about peace negotiations, but the discussions did not produce results. Fierce fighting was ongoing in the Northern and Eastern Provinces.

1987-1989. In 1987 India provided peacekeepers to Sri Lanka to stop the violence between the Tamil Tiger rebels and the Sri Lankan military. India had a strong interest in the Sinhalese-Tamil conflict, because India ‘s southern state of Tamil Nadu with about 60 million ethnic Tamils is only 20 miles across the Palk Strati.

The India Peacekeeping Force itself became embroiled in combat with the LTTE. More than 1000 Indian soldiers were killed in the clashes. The Tamil community accused the India Peacekeeping Force with civilian massacres, rape and disappearances. In 1989, the Peacekeepers were withdrawn. The venture was wholly unsuccessful. Instead of calming the situation, it added to the list of Tamil grievances against the Sri Lankan government.

After the departure of the India Peacekeeping Force, the conflict between the Sri Lankan Army and the Tamil Tiger rebels escalated into all-out war with atrocities on both sides. The LTTE abducted Tamil children to fight as soldiers on its behalf. Amnesty International reported that the government was responsible for thousands of Tamils being ‘disappeared’ or killed in extrajudicial executions in the combat zone.

1990s . The Tamil Tigers gained a reputation for being ruthless and for their suicide attacks in urban centres. The Tamil Tigers not only used terrorist suicide bomber tactics, but were also equipped for substantial land, air and sea operations.

In mid-1990 the LTTE captured more than 100 policemen and then killed them in cold blood. Later that year, the LTTE forced about 75,000 local Tamil Muslims to permanently leave the Northern Province . The Tamil people in Sri Lanka are primarily Hindu, but there is also a substantial Muslim Tamil minority. The Tamil Tigers are Hindu.

1995. Another attempt at peace talks between the Government and LTTE failed and the LTTE took control of more and more territory. 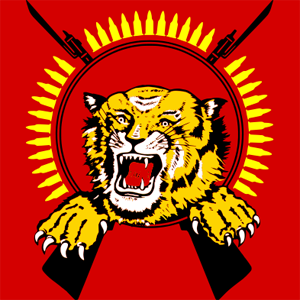