AMID CIVIL WAR, A TRANSITIONAL NATIONAL GOVERNMENT IS FORMED

Mar 1995. The last troops of the failed UNOSOM II mission withdraw from Somalia.

Sept 1995. Hundreds of Muhammad Farrah Aidid’s militia attack the city of Baidoa; they kill 10 Somalis and take hostage 20 foreign aid workers and a journalist, who are released one week later.

Aug 1996. Muhammad Farrah Aidid is killed by a rival faction. He is succeeded by his son, Hussein Mohamed Farrah.

Mar 1998. After seven years of fighting, Ali Mahdi Muhammad and Hussein Mohamed Aidid agree to a joint administration for Mogadishu.

July 1998. Local leaders proclaim the Puntland State of Somalia—an autonomous region. Unlike the self-declared Republic of Somaliland, Puntland is not seeking independence from Somalia. [MAP] 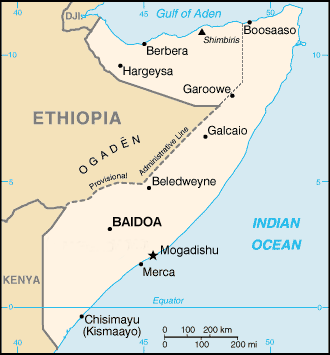 Oct 2000. President Hassan and newly-appointed Prime Minister, Ali Khalif Galaydh, arrive in Mogadishu. Galaydh announces his government, the first in the country in almost 10 years. The Transitional National Government is supposed to restore stability in Somalia, but most of Somalia remains under the control of various rebel groups.

Aug 2001. Amid ongoing drought and war, the UN declares a famine affecting up to 30 million Somalis. Delivery of food aid is hampered by Islamist militants aligned with Al Qaeda who control the much of the famine-stricken regions. 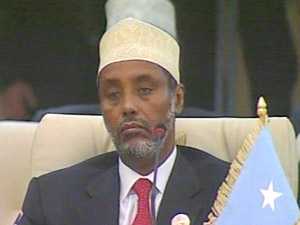