1922. Ukraine becomes one of 15 constituent republics of the new Soviet Union.

1954. The Government of the USSR transfers Crimea from the administrative jurisdiction of the Russian republic to the Ukrainian republic—both part of the USSR.

Dec 1991. In a referendum in Ukraine, 92% approve parliament’s August declaration of independence. In Crimea, only 54% approve independence.

Dec 2004. In an election re-run, Viktor Yushchenko is declared the winner and Ukraine’s new President. Yanukovych unsuccessfully challenges the election result and resigns his post as Prime Minister.

Aug 2011. Yulia Tymoshenko is arrested on charges related to a 2009 gas contract with Russia’s Gazprom.

Oct 2011. Tymoshenko is found guilty of criminally “abusing her office” and given a 7 year prison term in what has been called a “show trial.” The verdict is condemned by the US, EU and Russia.

Nov 21, 2013. Under pressure from Russia, the Ukraine Government rejects an agreement on closer trade ties with the European Union just one week before its signing in favour of developing closer ties with Russia.

Nov 30, 2013. Fearful of a return of Russian influence and wanting closer political, economic and social ties with the European Union, Ukrainian citizens gather in Kyiv’s Independence Square to protest cancellation of the EU agreement. Riot police storm the square resulting in a number of injuries.

Early Dec 2013. The anti-government demonstrations in Kyiv persist and grow to hundreds of thousands. Protesters’ blockades and tent camps are met with violence by government force troops. Some of the protesters’ anger is “fuelled by perceptions of political corruption, and the alleged close links between the government and mega-rich oligarchs.”

In Donetsk in eastern Ukraine, the Communist Party holds a rally calling for an referendum on ties with Russia and supporting the (re-)union of Ukraine, Russia and Belarus. 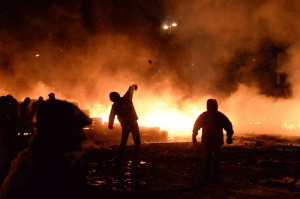 Jan 2014. Parliament passes restrictive anti-protest laws. Two protesters are subsequently killed by gunfire — the first deaths since the protests began in November. The Prime Minister resigns and the law is repealed.

An arrest warrant is issued for Yanukovych.

Pro-Russia rallies continue in Crimea in southeastern Ukraine where the vast majority of citizens are Russian-speakers.

Feb 28, 2014. Armed men in unmarked combat fatigues, but believed to be Russian military personnel, take control of the international airport and a military airfield in Sevestopol, the capital of Crimea province. 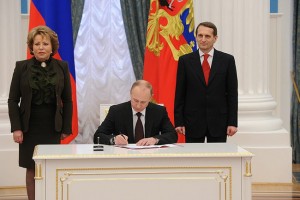 Mar 6, 2014. The parliament of Ukraine’s Crimean region votes to join Russia and schedules a referendum for March 16. It is widely believed that Russian forces have crossed the border into Crimea to support the separatist agenda.

Mar 16, 2014. Crimea reports that in the referendum, 97% of Crimea’s voters support secession from Ukraine and joining Russia.

Mar 18, 2014.  Russian President Vladimir Putin and Crimean leaders sign The Treaty on Accession of the Republic of Crimea to Russia, which makes Crimea part of the Russian Federation.

Early April. Pro-Russia separatists in eastern Ukraine, take control of government building and then are repulsed by Ukrainian security forces.

May 11, 2014. Pro-Russian authorities hold referendums on secession in Donetsk and Lugansk in eastern Ukraine. The separatists declare overwhelming victory.